The Legacy of Alum Creek 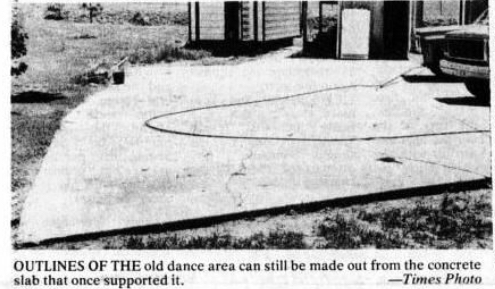 In Bastrop County, just four miles from the county seat that shares its name, lies the community of Alum Creek. Alum Creek was founded in 1829 by seven families from Stephen F. Austin’s lower colonies, and by 1884, the population peaked at 200,  decreasing to around 40 by the turn of the century.

The Great Depression delivered another blow to Alum Creek, but economic hardships did not deter “Uncle John” Briggs from opening a dance hall on his property in the late twenties. A popular destination for not only the community of Alum Creek, but for surrounding cities as well, Briggs’ Hall seemed to hold a different memory for each of its guests. In his article, “The Alum Creek Story – Honky-Tonks and Rebirth,” journalist Steve Vasey writes how although Briggs did not sell alcohol, some patrons remembered a number of drunken brawls taking place at the hall. One man from Smithville even recalled getting into a fight every time he attended a dance at the hall. Though the hall seemed to be very popular within the county, Uncle John decided to close the establishment in the late thirties.

The vacancy left by the Briggs Dance Hall was filled nearly two decades later by a rough and tough Louisianan by the name of Eddie Pittman. What started as a restaurant located across the highway from Briggs Dance Hall, soon became the epicenter for music and entertainment for Alum Creek. According to Vasey, nearly everyone living in Bastrop County during Pittman’s ownership of the hall had a memory of either the hall, or the man himself. The stories of Pittman’s rough and tough ways are rivaled only by those of his kindness, with many remembering the man for his generosity. The stories of his dance hall, known as Eddie Pittman’s Place, are the stuff of Texas legend. There are some that claimed Pittman used the hall to produce and sell moonshine (though this was disputed by a local sheriff). As far as the music goes, patrons recalled seeing everyone from Bob Wills and The Texas Playboys, Webb Pierce, the Texas Playboys  and even a young Elvis Presley performed at the hall.

Eddie Pittman, after a lengthy battle with diabetes, gave up his hall and moved back to his native Louisiana. The hall would continue on under a couple different names including The Ponderosa, then Dean and Jean’s and finally, Verline’s. Sadly, a fire destroyed the structure in late 1971, taking with it one of Alum Creek’s most beloved and well known buildings. The stories of “Uncle John” Briggs and Eddie Pittman are reminders of the importance of Texas dance halls, and the variety of services they provide communities. While there is no doubt both halls provided their communities, and even cities as far as San Marcos and Waco, an opportunity to dance and socialize, they also strengthened the small community when they seemingly needed it the most.