Bethany Wolf is a versatile executive with a passion for bringing together resources, individuals and organizations to build and implement strategies and programs that address community needs. As the Executive Director of TDHP, she works with the Board of Directors and with community partners to ensure the great work of preserving Texas dance halls and the authentic music and culture found in them. She has over 15 years of experience in the non-profit and public sectors spearheading major strategic shifts to transform the way organizations work. Bethany holds a Master of Arts in Museum Studies and has served at the Smithsonian Institution and in Cultural Affairs at the Embassy of Australia. Most recently, as the Director of Communications at WBCP, she led a comprehensive communications initiative that successfully revitalized the organization’s brand identity. Bethany enjoys spending time with her family and friends, including her kitten Sophie. She is also an avid yoga enthusiast and is learning the Texas two-step.

Deb Fleming served as the president of the Board of Directors for Texas Dance Hall Preservation from 2014–2017 and became TDHP’s first executive director in June 2017. Deb is the current business/tour manager for five-time Grammy Nominee and 10-time Blues Music Award winner Marcia Ball and her international tour band, based in Austin, Texas. Deb migrated into the music business after a 20+-year tenure as a healthcare executive running large risk-management companies in Texas, South Carolina, and Georgia. In 2005, she bought and managed a 1200-person-capacity live music venue just east of Austin, before being recruited by Ball. A fifth-generation Texan and San Antonio native, Deb discovered her long Texas lineage on a dance hall visit to Panna Maria, and thus began her love and interest in the historic halls. 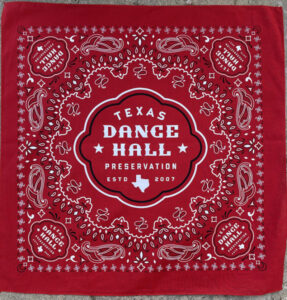 Stephen Ray administers Texas Music Office’s programs like the Texas Music Office License Plate Grant program, the TMO internship program, and the day-to-day office travel schedule that allows the small 3 person team to be in multiple places at once, covering more than 50K miles of work travel in just one year. Additionally Steve heads up the TMO’s music history program, including developing a Texas Music Trails program that promotes music history tourism around the state. He is the current President of the Board of TDHP.
Stephen Ray (President)

Growing up in Houston, this almost- native Texan didn’t discover her love of dancing and dance halls until she moved to Austin to attend the University of Texas, where she studied archeology and anthropology. After graduation, Kelley worked as an archeologist, with projects that took her all over the state, exposing her to Texas’ unique cultural history. Through her travels, Kelley’s interest began to shift “above ground.” Her love of Texas history and architecture eventually led her back to UT, where she received her MS in Historic Preservation. Kelley is currently an architectural historian and historian for an engineering firm in Austin. In her free time, she enjoys hiking with her dog, Franklin; listening to live music; road trips, dancing, and continuing the search to find the perfect pair of boots.

With more than 20 years of marketing experience in the real estate industry, Tracy Rohrbacher transitioned to tourism in 2013 and currently holds a marketing position with a Houston-area convention and visitors bureau. She creates and curates content for marketing channels geared toward leisure travel, in addition to event planning. Rohrbacher earned the Certified Tourism Executive (CTE) designation by Texas Travel Industry Association and the Texas Destination Marketer (TDM) certification by the Texas Association of Convention and Visitors Bureau in 2017. A native Houstonian, Rohrbacher is also an active volunteer with the Houston Livestock Show & Rodeo.

Josh Conrad is a historic preservation consultant with HHM & Associates in Austin and has worked as a preservationist in Texas since 2010. He specializes in developing new preservation data management and analysis systems. He is currently a doctoral student in the University of Texas School of Architecture.

Alexis McKinney is an architect with a diverse background of project types ranging from the restorations of historic Texas Courthouses, a partial restoration of the San Jacinto Monument, numerous projects from planning through rehabilitation within Camp Mary’s historic district or within historic downtowns rehabilitations of historically designated buildings, or commercial and educational Her focus on historic buildings started with HABS level documentation projects of Pointe du Hoc, France and Sharrock-Niblo farm, Dallas. She is actively engaged in statewide activities to share the importance of historic structures in the built environment through committee participation with Texas Society of Architects, the Dallas AIA, and on the board of Texas Dance Hall Preservation. She enjoys architectural photography and has contributed to the Buildings of Texas book series Alexis teacher preschool Sunday school and is slowly renovating her home with husband Chris, sons August and Edwin, and two corgi dogs.

Sehila Mota Casper is a historic preservationist with a decade of experience working in heritage conservation, community building, and preservation equity. Previously, Sehila worked at the City of Austin to assist in preserving marginalized histories and was a senior field officer at the National Trust for Historic Preservation, working nationwide to protect America’s one-of-a-kind historic treasures. Sehila is the recipient of the 2014 National Trust for Historic Preservation Mildred Colodny Diversity scholarship and a 2013 Texas Historical Commission Preservation Scholar. Until recently, she served on the Board of Latinos in Heritage Conservation and is an active Board of Director for the National Collaborative for Women’s History Sites, Preservation Texas, the Texas Historical Commission’s State Board of Review, and the Friends of the Texas Historical Commission. Sehila is a graduate of Texas Woman’s University Department of Visual Arts and holds a Master of Fine Arts in Historic Preservation from Savannah College of Art and Design. She lives in Bastrop, Texas, with her husband David and two dogs, Osito and Paul.

Matt Reyes is a Far West Texas native, who’s lived and worked in Austin for 18 years in the advertising industry, currently working at Publicis Groupe’s Razorfish. He has been instrumental in civic engagement projects throughout his life, lending his marketing and cultural expertise to non-profit groups like Voto Latino and Rock the Vote. Matt has been featured on C-SPAN, Al Jazeera, Washington Life, Minority Business Entrepreneur and has spoken at top tier events with The New York Times, SXSW, George Washington University, Voto Latino Power Summit, and The University of Texas at Austin.

At a towering 6’7”, Philadelphia-born Ray Benson is considered a giant in the industry, but his contributions to music history, not his height, have made him a dominant figure on the music scene since 1970. As the frontman and founder of the world-renowned Western swing band Asleep at the Wheel, Ray has overseen the release of more than 25 albums, toured more than 150 dates each year, and won 10 GRAMMY™ Awards. He has been honored as the official Texas State Musician (2004) and Texan of the Year (2011) and has received the Lifetime Achievement Award from the Americana Music Association; the NAMM Foundation’s Les Paul Award for Technical Excellence & Creativity (2008); and the Texas Medal of the Arts Award for Multimedia (2011). As a producer, Ray has worked with such artists as Willie Nelson, The Avett Brothers, Aaron Neville, Aaron Watson, and Suzy Bogguss, to name a few. Benson is an active advocate and founding board member for the Health Alliance for Austin Musicians (HAAM) and also serves on the St. David’s Foundation Board. He is the author of the 2015 memoir, Comin’ Right at Ya: How a Jewish Yankee Hippie Went Country, or, the Often Outrageous History of Asleep at the Wheel. Currently, Ray hosts “Austin Outer Limits,” a bi-weekly segment on Sirius XM’s “Willie’s Roadhouse,” featuring hand-picked songs from all kinds of genres from his personal collection.

Sam Seifert is a musician, engineer and producer in Austin, Texas. He is the manager for musician Ray Benson and the American country band Asleep At The Wheel. He is currently serving as the proxy on the Board for Ray Benson.

Priscilla Sauceda is a business entrepreneur based in Austin, Texas. After graduating from the University of Texas at Austin, she co-founded Sauceda Industries, an ecommerce 3PL company, and recently sold it to Cart.com, a fast-growing Texas-based startup. A lover of two-step, tejano, waltz, and polka dancing, she enjoys being able to dedicate her free time to supporting dance halls across Texas who continue to provide spaces dedicated to bringing Texans together through live music and dance. She enjoys spending her time with her husband and two kids and exploring things to do around the great State of Texas.

Your kind and generous help makes it possible for us to work directly with dance hall owners to provide technical assistance, workshops, grants for building repairs, and other resources. Please become a TDHP Member and make a donation today.