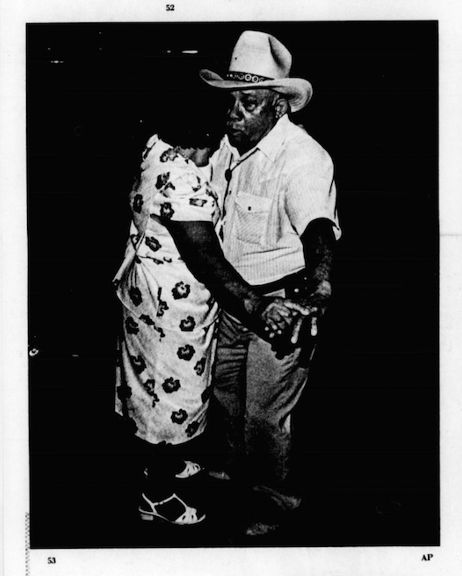 Built in 1963, The Pan American Ballroom in El Campo, the ballroom was built and managed by Ignacio “Joe” Vallejo. The ballroom hosted dances for El Campo and surrounding communities throughout the years. In the picture and advertisement in El Campo Leader-News, most of the music groups brought to the hall played Spanish Music, such as Los Differentes de Matamoras Band, Los Bandidos Band of Houston, and Los Unidos Band of Corpus Christi, but the hall was open to patrons from all backgrounds.  The ballroom was a place where Latinos and Mexican Americans could gather and dance celebrating holidays and events together.  Prominent bands played the ballroom: the Glenn Miller Band performed there, and in 1965, Jan Garber’s Orchestra played in the Pan American Ballroom, and according to The Victoria Advocate, Garber’s Orchestra was the “Number One Dance Band in America.”

As evidenced by several historic newspaper articles, the ballroom also hosted various organizations and events throughout the years. The ballroom was open for the use of other organizations that included the County Cotton Clinic, El Campo Rotary, and Home Demonstration Club women of District 11 for social gatherings and meetings.

Ignacio Vallejo also used the ballroom to fundraise for different causes in the community. Vivian Vallejo, the wife of Ignacio Vallejo, contributed to fundraising for educational scholarships and managed the ballroom with her husband. In 1975, Vallejo fundraised $1,000 dollars for a University of Houston student to buy a car to commute from El Campo to Houston.   The family also hosted dances for the Muscular Dystrophy Association in correlation with the Pan American Scholarship Club. Another fundraiser created by the Vallejo family was the Little Queen’s Contest, which afterward would host a dance. This event was hosted to gather funds for a new wing added in the St. Roberts’s Catholic Church.

In 2003, Elisa Estrada and her family purchased the ballroom and are the current owners. Estrada explains that the ballroom continues to offer a space for the community to celebrate Quinceañeras, Baptism, weddings, and dances.

Like so many dance halls throughout Texas, the Pan American Ballroom played, and continues to play an important role in its community, by hosting and inviting people from all walks of life to enjoy each other, experience music, and celebrate their connections.