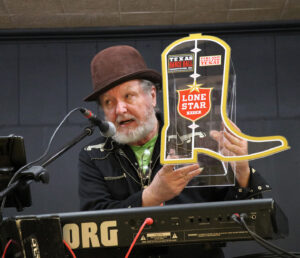 Last month, the South Texas Polka Hall of Fame inducted friend of Texas Dance Hall Preservation, Inc., and Advisory Board member Gary E. McKee as part of their 2022 class. It is hard to imagine a more deserving person for the distinction of “Outstanding Polka Supporter,” the category of McKee’s induction. Attending dances throughout Texas weekly with his ever-present camera, Gary is quite possibly the state’s greatest supporter of the Polka.

Born in Schulenburg, Gary’s love of music began at a young age. Listening to albums by Bob Wills, Roy Acuff, and early vocal group the Ink Spots, the young boy’s father regaled him with stories of dances and even seeing Bob Wills himself. His first real concert was Johnny Cash at the Astrodome, though by his account, his seat was “too far” to see the legendary country singer. Though he was in the center of the Texas polka community, McKee was unaware of the significance of his surroundings. Recalling his early dance hall experience, McKee says, “When I was five years old, I was going to Swiss Alp Dance Hall to pick up pop bottles and beer bottles to make money. I was oblivious!” It was not until attending a Virginia concert by iconic Texas trio ZZ Top that McKee realized how unique Texas music was. “That was the first time I heard the music,” he recalls wistfully, “I wasn’t in Texas anymore, and I identified with it.”

Returning to his home state after serving in the Navy, McKee quickly immersed himself in the popular “Cosmic Cowboy” scene of the late 1970s. Losing interest in rock music during the mid-1970s and 1980s, the photographer quickly realized that the only place to have fun with your friends, was at dances. McKee began attending church picnics, where dancers of all ages would fill the floor. A self-taught dancer, Gary was pleased to give some tips to the author on how to dance with the best of them: “Listen to that backbeat,” he says, “Don’t listen to that accordion, listen to that drummer and that bass guitar!”

Gary has taken his love of the Texas Polka and created an impressive body of work dedicated to the genre and its artists. The photographer’s efforts can be found in Texas Polka News (a publication dedicated to covering all genres of Texas dance hall music), along with his popular Flickr page, containing tens of thousands of pictures of dances and events across Texas. McKee also serves as an Archaeological Steward for the Texas Historical Commission, and as an advisor for Texas Folklife in Austin.

The sounds of Texas Polka are thankfully alive and well throughout our state, with many young fans and bands keeping the sounds of groups like Joe Patek’s Orchestra and Adolph Hofner (a personal hero of McKee’s) filling venues nightly. “It will continue being played,” says Gary optimistically, “We have some younger bands, mostly out of Ennis, Texas. They are playing the old stuff with a lot of energy and love.” When finally asked just what “Polka” music is, the photographer paused before answering. “It’s hard to define,” he says before pausing again, “I couldn’t really tell you what polka is, except that it’s fun. You might be tripping over each other, but you’re going to have fun doing it!” Finally, McKee says that Polka is “Happy music for happy people.”

On behalf of Texas Dance Hall Preservation Inc., congratulations to Gary E. McKee on this accomplishment!