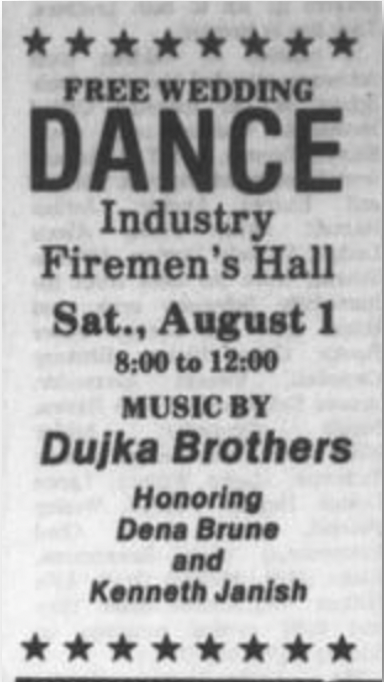 While perusing old Texas newspapers looking for information about dance halls, one comes across a lot of interesting, although sometimes extraneous information.  One piece seen over and over in the newspapers in several the counties was the “free wedding dance.”  Admittedly, I had heard of it before; but I really didn’t know much about the practice.  It’s a practice that is hard to imagine happening in modern times.

But what exactly is a “free wedding dance”? Trying to find out a little more, I contacted county historical commissions for more information.  I spoke with Caroline Zaskoda, an Austin County commission member, who had been to these dances as a child.

According to Ms. Zaskoda, people often did this to include others in their celebration not included in the wedding itself.  Many of the churches in these communities were small, appropriately so, but people’s connections in their communities were far reaching.  If both bride and groom were from the community, the connections and ties would be doubled, making for one large party.

A “free wedding dance” provided the families with a way to include more people in the celebration of the marriage.  It was an example of the closeness that developed within many small towns and the importance people placed on those relationships.  I think it is overwhelmingly an example of the warm heartedness of the people living in those places that such a wonderful tradition developed.

Several examples of the practice were mentioned in Austin and Colorado counties, mainly from the 1940s through the 1970s.  I wondered just how widespread the practice was and when it began.  In the Portal to Texas History, (a go to must for anyone looking for anything in the past regarding Texas) a quick search of “free wedding dance” pulled up 1,865 entries with newspapers from 16 counties Newspapers from Austin, Bastrop, Bell Brazoria, Burleson, DeWitt, Fayette, Gillespie, Harris, Jackson, Kendall, Lavaca, Matagorda, McLennan, Medina and Williamson all had listings for a “free wedding dance.”

The earliest listing was from 1910 in The Hondo Anvil Herald in Hondo, Texas, in Medina County.  The county with the most listings was Fayette with 686 over 6 decades with the majority coming from the 1950s.  Lavaca County had 661 listings spanning 40 years from the 1920 through the 1960s.  Austin County had 227 listings for “free wedding dances” followed by McLennan with 121.

Obviously this inclusive tradition was one that many halls throughout the region hosted and encouraged. A testament to the spirit of community and celebration found in our wonderful Texas dance halls.